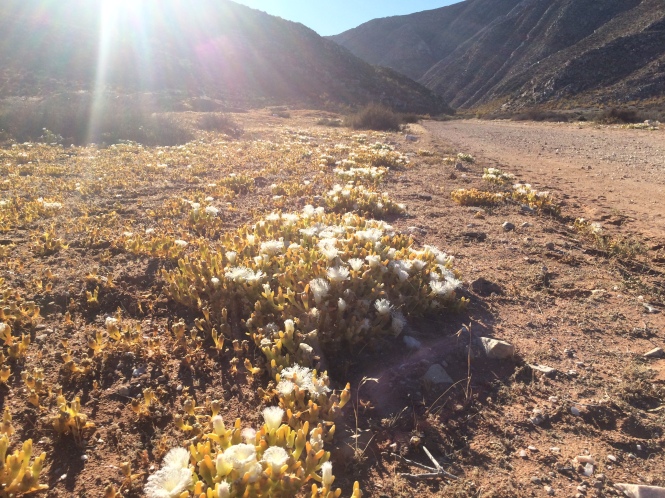 Though it’s always pitch black when the alarm goes off, though I know we will be in the truck again for most of the day, a special feeling accompanies each waking. It’s hard to put into words…

Warm, maybe, from both the gentle morning heat of the desert and the fond attachment to place that one can cultivate surprisingly quickly;

Sweet, from the scent of the plants and the earth;

Or perhaps it is best left undefined.

Knowing this is the only way to cover the miles, to see everything there is to see in the time we have available, I jump up without lingering, my body screaming defiance, my mind too sluggish to do anything about it. Propelled by what is becoming habit, and an underlying eagerness, I launch myself into the routine: toilet, shower, brush teeth, dress, gather the remaining items and pack them into the truck. It doesn’t matter that the accommodations change almost nightly. The routine is what anchors us.

I wake my sleepy son, the boy who can never be woken mid-sleep, and he joins us with groans and screeches, somehow equally ready for the next adventure. Even at this hour.

My husband makes coffee before we go and I pour it into myself gratefully, feeling a touch more human. At somewhere between 4 and 5 am, I don’t want food but I pack my trusty bag of granola, a soy milk drinking box, and a banana in the front door of the truck, at the ready.

We leave the key on the table, pull the door shut. Another destination awaits.

The fun lies in climbing into the truck, pulling out, heading off, wondering what we’ll see this time, waiting for the sun to rise over the vast, dramatic land, to see what it will reveal on today’s stretch of road.

Most of our drives are 6 to 10 hours, some are longer. All of them afford us majestic views, breathtaking terrain, and sometimes animals. We record the birds we see in a book, compete to see who can spot a new animal first, remark on mountain ranges, stop to capture some small part of the moment in the camera’s aperture, though that doesn’t do it justice – only standing in it, being there, taking it in with the naked eye, breathing in the molecules and holding them briefly as part of ourselves, only that can really do any of it justice. Sometimes I imagine spreading my arms wide to embrace it all.

This was how we explored 4500 km of Southern Africa over 11 days in early 2016. A family on the move. Exploring, learning. The world both stretched in empty vastness around us but also shrank down to just the three of us, to the confines of our truck.

Despite taking 1000 pictures, the moments I didn’t capture on film are the ones that keep coming back to me, weeks later. That early morning stop in an Upington petrol station, for example. It was still dark outside, the stars splashed across the night, but the petrol station was buzzing; a hub for those of us up early, whatever the reason. I paused as I was gathering enamel bowls and plastic cups and looked around, taking in the vibe. A truck driver and the somewhat grizzled woman at the till were engaged in a conversation in Afrikaans. Two younger men were chatting at the automatic coffee machine. It was nothing special, and yet it was all special.

There were also the times we almost ran into serious problems – a pothole we hit too hard just after crossing into Namibia, a washed out stretch of abandoned road we navigated early one morning in the silent mountains near Eksteenfontein, the time we actually did get stuck in the sand – but it was specifically because we embarked on this adventure alone, without a group, without a guide, without any safety nets, that it was so momentous.

I came down to the water
with the wave worshippers
sun worshippers
and watched the sun set
across the heaving sea
let its cold wash over me
breathed deeply
until my mind cooled;
together, we, strangers
grew drunk on the magic
bowed to the power of nature
its swirling poetry
then withdrew, one by one,
into the verdure of the hills.

1.
The churning briny white of the ocean swirls
crashing, retreating, crashing
its chilling cold refreshes
washing away the day’s burnt heat, the dust.
A small boy ventures out –
just up to his waist –
he stands, letting waves knock him sideways
again and again they douse him,
a scruffy dog trots out seeking friendship,
more children join in,
dogs race back and forth, frolicking,
following balls and frisbees and birds into the dunes,
then the surfers come;
the afternoon’s quiet teems with life
with a soaring sense of goodness
stretching into the silver-sun drenched evening.

2.
Steel-grey clouds glide across steel-grey water
ceiling and floor
sounds move, watery, between them;
a dog barks, a bike whines along the road,
the crashing waves echo,
each one of them
topped frothing-white
all the way out to infinity.
The cold storms down from the mountains
creeps through house cracks,
hinting at autumn,
all is still for a moment before the next gust
shaking trees and gates,
the stillness falling back in just as suddenly.

3.
Even in storms the waves are jewel-toned
they froth and boil
reaching ever closer, ever higher,
the tide pulling and pushing,
tossing seaweed – it dances
a great manic dance,
receding only to gather strength
to return, flooding pools at higher ground
liberating the rainbowed mussels
left behind between mosses,
closer it splashes, finally forcing me back
parallel with other beach-goers
until finally they leave
and it is just me,
alone with the seething turquoise sea. 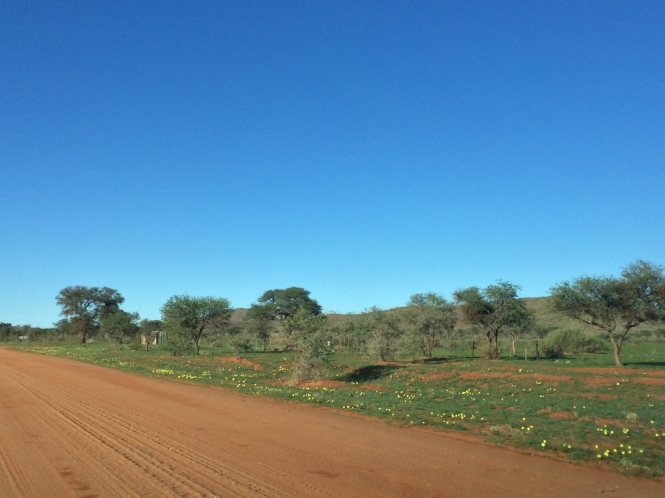 Early morning. The full moon is high and bright, the stars still splashed across the sky. As the moon slides lower, it pales to golden in a mauve moonset. The darkness slips slowly from the night into shadows. Across the rain-soaked greening savanna, the sun begins to rise, burning orange and red and reaching out to touch mountain tops, setting them aflame. The moon floats on one side of the horizon, the sun on the other, in a fleetingly perfect balance.
The colours of the land burst from the dawn, turning red and green below the deepening blue above. The road, awakening, becomes a window onto the lives lived out along it:
A family—parents and four children—piled into a horse-drawn cart, trundle along at a trot.
A group of brightly dressed figures gather at a farmstead overhung by ancient rock mesas – a wedding, or a funeral?
A man crouches over a black iron pot in tree-shade at the edge of the simmering road. The pot steams in a fire; lunch.
Crossing these boundless distances also reveals improbabilities, impossibilities:
Slow-moving storm clouds gather, purple-black and charged with lightning but, although the thunder sounds, the rain may never come.
Rivers named and marked with blue signs have been dry for generations, stony beds winding across the land, across time, yet I have seen them flood after a night of unexpected rain.
I absorb all this and more — the warm smell of red sand, the bitter scent of camel thorn, the song of a desert night,  the music of countless stars, and lines and lines of hidden herds drawn into hazy mirages criss-crossing the land.
I weave all of this into my being, into my perception of this place, creating my own understanding, my own experience of here. I stand in the middle of it, and for this one moment, it is all that I can see. It is all there is.

Early morning and the wind has calmed

the night’s chaos,
the whirling, roaring,
subsided into silence;
scrabbling awkward squawks —
guinea fowl, hadeda, laughing doves —
and the pepper-skunk smell of the fynbos
fill the emptying spaces.
It is the familiarity of a life
not mine,
dream-like, I watch it slip
through eyes
I cannot, will not, close.

and yadda yadda, an aliyah blog